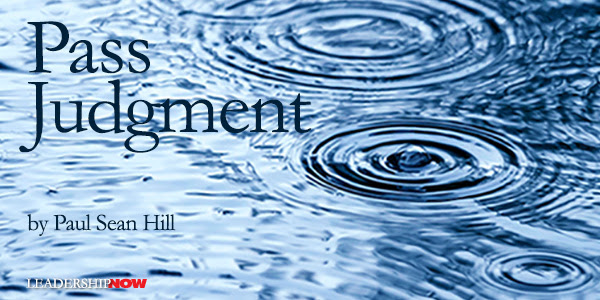 POLITE SOCIETY teaches us that passing judgment isn’t nice. It’s demeaning, we’re told, especially when it’s applied to people. However well intended though, a reluctance to judge when leading people and managing an organization will hold the people and the organization back. The key is learning to pass judgment in a way that serves your people and organization well.

We learned this the hard way in NASA Mission Control’s management team. What started as a top executive trusting his senior managers to run their divisions rather than discussing challenges or weak performance in front of their peers, evolved into an expectation to keep your criticisms of the other divisions to yourself. Over time, this evolved even further to not even mentioning any significant issues or challenges in management meetings. The management team mantra became, “No ripples in the pond.”

While this led to polite, non-confrontational, and seemingly collegial meetings, it also meant an ever-growing list of cost, schedule, and technical problems that were not being addressed or even on the radar-screen of the senior management team running our $650-million/year enterprise. True to the stereotype of government organizations, we had become known as a “marching army” who cost way too much and still did things the way we had for almost 50 years. Our customer program managers were seeking to abandon us and find any other team to turn their spacecraft over to because they had lost faith in our ability to control costs, even though they still considered us to be the best operations team on the planet. Worst of all, most of their criticisms were well founded, and we had become culturally incapable of discussing and doing anything about them as a management team thanks to “no ripples in the pond.”

Judgment Can Set an Organization Free

Then we looked outside our walls by benchmarking operations teams in several different industries, in both the government and the private sector. We were shocked to find example after example of teams who not only were better than us but also made us look like amateurs in some areas, including some that we considered core competencies. That was the game changer we needed.

From that realization, we knew we had to put the “ripples in the pond” and discuss where the organization’s performance was lacking. Choosing otherwise meant that instead of being part of the solution, we were the problem.

We started passing judgment rather than hiding from it. We identified management practices that were contributing to our decline and those that we needed to change or implement to improve. The goal then became intentionally performing at the highest level, which we all knew was the intended standard of our high-performing organization all along.

We weren’t making personal judgments about each other, but we became adamant in holding each other accountable to this transparent, value-driven, fully engaged style of managing. It set the tone for every discussion whether the decisions entailed our technical work, strategic risk, business management, personnel development, or any subject. Over time, it became a natural part of doing business. We completely upended “no ripples in the pond” with a formal policy of “clarity over diplomacy.”

Rather than getting in our way, this level of candor and on-going judgment increased the trust across the team. This genuine and open collegiality also led us to management practices and business strategies we otherwise could not have developed without the talent and experience from across the full management team. As just one measure for how that affected organizational performance, in the course of two years we were able to reduce total costs to our customers by half while performing the same work and still delivering the expected high-quality support.

Learning to pass judgment about team behaviors is one thing, doing the same individually can still be a challenge. A respected senior executive once told me, “Nobody’s any better or worse, really. They’re all about the same talent level. There’s nothing you can really do as a manager to change that.”

In practice, this individual version of “no ripples in the pond” feels nice because it avoids the discomfort that can accompany passing judgment. But it also keeps us stuck, because, of course, we are not all the same. We all have different strengths and different weaknesses, and top performance requires us to first understand both.

In the same way that benchmarking helped our management team, personality assessments (Myers-Briggs, Birkman, DISC, etc), feedback, and executive coaching are all great tools for gaining insights into our individual strengths, weaknesses, and how we affect others because of them. With that awareness, we can then make judgments about which of our behaviors help the organization be successful and which get in the way.

Rather than being critical, these judgments are aligned to the team’s success, and with them we can choose to deliberately improve.

See The Ripples in the Pond

The ripples are already in the pond in everything we do. The question is: Are we willing to acknowledge them and proactively do something about them?

High-performing teams and individuals do not ignore the ripples in the pond – the indicators of problems that could erode success and lead to failure. They learn to see them and do something about them.

That requires passing judgment, but this isn’t about judging individual worth. It is about judging our behaviors and how well aligned they are to the team’s success. With that understanding, critical judgment becomes less threatening, and the actions required to improve likewise become easier to identify and implement.

From those judgments, the highest performing teams are able to harness the strengths from across the team, while also working around or improving each of our individual weak areas. They are then best equipped to handle challenges and identify opportunities.