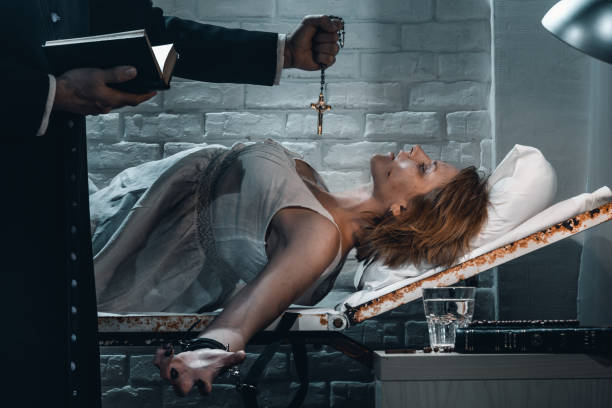 There is a normal type of real-event OCD (obsessive-compulsive disorder) where a person obsessively ruminates about a real, or imagined, failing from the past. In the more severe cases, these ruminations, and unsuccessful attempts to rid one of them (compulsions), can be debilitating. Such individuals are usually best treated by a combination of CBT (Cognitive-Behavioral Therapy) and medications.

But there is sometimes, masked within the deceptive trappings of an OCD disorder, an actual attack by the Evil One. One senior exorcist estimated that 25 percent of the population is suffering from some form of demonic obsessions. I have no reason to believe that figure is exaggerated.

For example, “John” was tormented by evil and blasphemous thoughts to the point of no longer being able to function. Years of psychotherapy brought no relief. It was noteworthy that these obsessions began after his having relapsed into pornography. Confession, amending his life, and several deliverance sessions all but extinguished the mental obsessions.

Similarly, “Alicia” was tormented with thoughts of self-hatred and despair, often bringing her to the brink of suicide. While psychotherapy was helpful, the mental attacks were intense, out of proportion to her psychological state, and the attacks began whenever she tried to pray or go to Mass. She, too, found considerable relief through renunciation of the demonic and subsequent deliverance prayer sessions.

In both cases, the mental obsessions are not completely gone, because their root is in their normal psychological weaknesses. But it became clear that Satan, being an opportunist, was exploiting these human weaknesses. He exaggerated these weaknesses to the point of complete dysfunction, despair, and suicidality. Now, Alicia and John suffer with a much reduced, normal, human weakness. The demonic ferocity of the attacks has dissipated.

Demonic obsessions can be distinguished from psychological OCD ruminations by their intensity, being out of proportion to one’s human state, and often brought on by engaging in holy practices. Also, there is usually an opening to the demonic that can be identified, especially in recent sinful practices and/or occult practices. Finally, the intensity of the mental attacks dissipates in the wake of deliverance prayers.

At the end of one’s life, this demonic obsessive assault is no longer hidden. As one enters the final judgment, Satan, the great accuser, accuses the soul of all of its infidelities in life. He demands that it be justly consigned to hell. As St. Catherine of Siena relates in The Dialogue, the Lord revealed to her that: “In the moment of death…the Devil accuses them with great terror and darkness…the Devil torments him with [his] infidelity in order to bring him to despair.”

The soul’s recourse in extremity, and always, is the mercy of God. Jesus paid the price of our sins. We are saved in this life, and the next, by the Love of our merciful God.