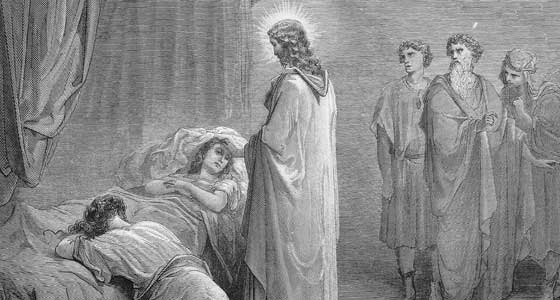 It is the only time in all the Gospels that Jesus calls someone his daughter. Why here? Why now? In order to call Jairus’s attention to the fact that he was not the only person there who had a daughter in need of healing. Twelve years before, this woman began to hemorrhage. As a result, the woman would have been made ritually unclean by her flow of blood, and therefore would certainly have been excluded from participating in the worship at the synagogue where Jairus was an official, lest she contaminate anyone who had the duty of sacred worship. Indeed, it seems likely that it was Jairus himself who excluded her from the worship at the synagogue, since he was the ruler there. For twelve years this woman was excluded from the house of her Father, while for twelve years Jairus enjoyed the company of his own daughter in his house.

If this was indeed the case, we can wonder whether Jairus ever thought about this woman, whether he noticed her or remembered that she was excluded from God’s house. Perhaps he did not even give her a second thought all these years. But now, at the moment when his daughter lay desperately ill, when time was of the essence to heal her, this same woman delays Jesus from coming to his home

We throng, we press upon him, but we never truly touch him 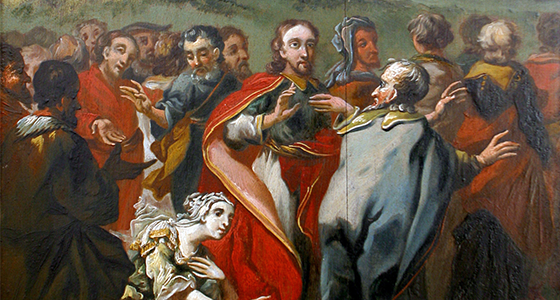 And it is certain now that he notices her. What was going on in his heart at this moment? Was he angry at her for holding Jesus up? Did he want her to just go away? All those thoughts came crashing down in the moment when he heard Jesus call her his daughter, and then in the next moment hear his servant say: “Do not trouble the master: your daughter is dead.” By causing Jairus to reflect on the condition of his own daughter, and upon the pain he now felt at being separated from her, Jesus willed to arouse in Jairus a new sense of compassion for this woman whom he had not recognized as God’s daughter.

There is another interesting detail about the cure of the woman with a hemorrhage: when she touches Jesus, she is one of a multitude to touch him. They are pressing upon him while she barely touches the hem of his garment, yet she alone is healed. So often we come to Jesus in the same way that this multitude does. We throng, we press upon him, but we never truly touch him, because we do not come with faith, but rather with demands.