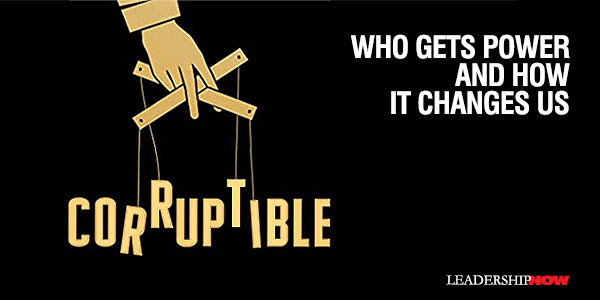 O worse people get power? Does power make people worse? We’ve all heard Lord Acton’s words lifted from a letter taking Bishop Creighton to task for his indifference to the torture and execution of innocents: “Power tends to corrupt, and absolute power corrupts absolutely. Great men are almost always bad men.” Thomas Jefferson Jefferson held a similar view. Writing to a friend, he observed, “Whenever a man has cast a longing eye on [office], a rotteness begins in his conduct.”

Power does indeed corrupt. But as Brian Klaas states in Corruptible, “our overly cynical view of how much power corrupts is wrong. Some of that has to do with four phenomena that are too often overlooked when we praise or condemn authority figures. I call these four phenomena dirty hands; learning to be good at being bad; opportunity knocks; and under the microscope.

What happens when an unbearable choice has to be made? Sometimes people in power, when faced with two bad choices, try to choose the lesser evil.

The dirty hands problem skews our evaluations of leaders by making them appear worse than they actually are. When we say “power corrupts,” we mean power makes people worse than they previously were. Instead, much of the time, they just have to make worse decisions, which isn’t the same.

Learning To Be Good at Being Bad

Bad people learn over time how to get better at being bad. Power didn’t make them bad. They have always had questionable character.

Learning is an integral part of getting power and holding on to it. That creates a misperception. If you analyzed the data, it would appear as if someone were getting worse over time—that power was corrupting them. In fact, their bad intent may have been static while their effectiveness increased. They were always corrupt. They just got better at it.

Our intuition is to determine who the “bad people” are by how often they do bad things. We make those judgments without any reference to how often an individual faced with an easy opportunity to behave badly and hurt other people. That’s a particularly relevant insight for people in power, because being put in a position of authority necessarily produces more frequent—and more consequential—opportunities for wrongdoing.

Those in power are scrutinized more than those with less power. No news flash there. But it skews how we view those in power—and those who are not.

Sometimes, the rich and powerful can use their considerable resources to divert that gaze, or to disguise abuse or crimes as legitimate activity. But much of the time, seemingly worse behavior by those in power can be chalked up to an exploration that we consider less often: they’re simply more scrutinized than the rest of us.

Nevertheless, most studies find that power makes us worse. One study called the “dictator game” found that as power increased, so did selfish behavior.

Before the dictator game was played, they asked participants how a leader should behave in a situation in which they’re tasked with sharing resources. As you’d expect, most said that a leader should be magnanimous and share fairly with others. Yet, when they soon found themselves in a leadership position faced with that exact choice, only half of the people in the low-power group actually behaved as they said a leader should. In the high-power group, only one in five stuck to their stated principles and shared fairly. Power doesn’t just corrupt, it also makes you more of a hypocrite.

Then there is the Dark Triad: Machiavellianism (the end justifies the means), narcissism (self-absorption, arrogance), and psychopathy (lacks empathy, is impulsive, reckless, manipulative, and aggressive). We probably all have a little of this inside, but at the far end of the continuum, we have much more than control freaks. We have tyrants and dictators who act their whims with abandon.

Psychopaths, the darkest of the Dark Triad, can blend in. “The psychopaths in the boardrooms are the intelligent ones who figured out a way to control themselves as they sought to control others.” They are “drawn to power and are better at getting it.” And they are rare. Fortunately, as Klaas shows, most bosses don’t peg the needle on the Dark Triad needle.

Since all of the available evidence points in one direction—“becoming powerful makes you more selfish, reduced empathy, increases hypocrisy, and makes you more likely to commit abuse”—why then do we let people control us that have no business being in power? And how do we keep them out?

Klaas offers ten prescriptions to this problem from improving our recruitment process, better oversight, rotation of leaders, to reminding them of their responsibilities, and the most effective tool of all, stop waiting for principled saviors—make them instead.

You may remember the story of Cincinnatus. As the legend goes, The Roman army was surrounded. The country was in need of a leader who would seize the moment and turn the situation defeat into victory. They called upon a man who was out plowing his field, a farmer. He came. He saw. He conquered. He went home. Cincinnatus gained fame for his selfless devotion to his country. This half-legendary hero of the Roman Republic gave his all in a time of crisis and then gave up the reins of power when the task was done and went back to his plow.

George Washington did the same thing over two thousand years later. After two terms as president, he refused to continue and returned to Mount Vernon. Neither man sought power, and perhaps that is why they were able to use their power wisely.

Instead of waiting for our principled saviors to leave their farms, a more realistic goal is to change our systems to make ordinary people behave like Cincinnatus: answering the call to power rather than seeking it, and relinquishing control rather than relishing its intoxicating effect as it corrupts.

Incorruptibility requires a character that we don’t see too often in our most visible leaders. It is not encouraged by social media, taught at schools, or in many homes. But that is the path for making power a tool for good for all. If we understand power, we know that we all have to potential to abuse it. That alone should temper our tweets when we want to attack someone who disagrees with us. Otherwise, we fall into the same trap we are condemning. Our stubborn assumptions corrupt our thinking. Fortunately, Klaas manages to avoid that in this exposé on power.

As Barbara Tuchman reminds us in The March of Folly, “Chief among the forces affecting political folly is lust for power, named by Tacitus as ‘the most flagrant of all the passions.’ Because it can only be satisfied by power over others, government is its favorite field of exercise.”