A priest celebrates the traditional Latin Mass at the Basilica of St. Pancras in Rome. | Thoom/Shutterstock

The Vatican has corrected a paragraph in its new constitution which it said erroneously referred to the Traditional Latin Mass as the “extraordinary form of the Roman Rite.”

Journalist Diane Montagna reported on March 24 that the constitution’s wording had been changed in the Italian text on the Vatican’s website.

When Praedicate evangelium was published on March 19, article 93 said that the newly titled Dicastery for Divine Worship and the Discipline of the Sacraments “deals with the regulation and discipline of the Sacred Liturgy as regards the extraordinary form of the Roman Rite.”

A Vatican official told journalists at a press conference last week that the relevant section of the constitution was written before the publication of Traditionis custodes, the pope’s 2021 document restricting Traditional Latin Masses, and was “a typo that should be corrected.”

The paragraph now says: “The Dicastery deals with the regulation and discipline of the sacred liturgy with regard to the use — granted according to established norms — of the liturgical books prior to the reform of the Second Vatican Council.”

Praedicate evangelium, which was nine years in the making, comes into force on June 5, the Solemnity of Pentecost.

Bishop Marco Mellino, the secretary of Pope Francis’ Council of Cardinals, said in a March 21 presentation of the constitution, that article 93 would be corrected “when I find the time to submit the new formulation to the Holy Father.”

In Traditionis custodes and the “responsa” that followed, Pope Francis indicated that the Old Mass should no longer be considered the “extraordinary form” of the Roman Rite, a term introduced by his predecessor Benedict XVI in Summorum Pontificum, his 2007 document liberalizing the celebration of Traditional Latin Masses. 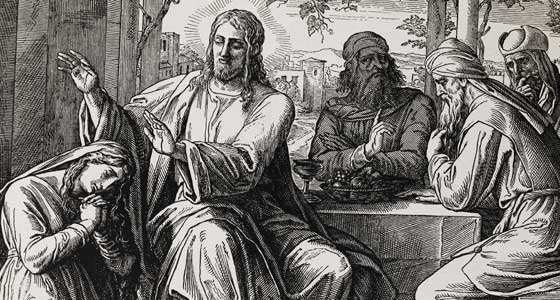 Jesus went about preaching as a prophet of repentance and an extravagant forgiver of sin. On the night before he died, Jesus said that the pouring out of his blood was for “the forgiveness of sins.”

But why is Jesus so concerned with sin? Why does he go about forgiving sins, even handing on to his Church the power to do it? It can be very hard for a modern person to understand what this means.

Sin is not a scientific category. We cannot measure it with instruments or treat it with medicines, and we tend to think only things that can be measured and treated in this way are real. If something is wrong, we seek a therapy for it—whether that therapy is medical or social or psychological.

But sin is not that kind of problem. To sin, in the biblical sense, is to act unjustly. It is to fail to give to another what is due. Because we are social creatures, and cannot exist or find happiness on our own, such behavior damages a person at the very root. It damages our ability to share life with others—most especially with God—and for creatures who need others, this is a kind of death.

What we owe to other people depends on our relationship to them, their needs, our needs, and various other factors. At the very least, we owe other people their basic human rights, but for some people, like our parents, we owe much more than the minimum.

What we owe to God, on the other hand, is absolute: we owe God everything because everything we have is a gift from him and because he is the rightful master of all creation. What is more, God is perfectly good, just, merciful, and loving, and it is wrong to mistreat one who always treats us with goodness, justice, mercy, and love.

The most common way we sin against God is to set our hearts on things that are less than God while we refuse to give our hearts to God, the giver of life who is all good and deserving of all our love.

There is no therapy or medical intervention that will fix things when we have failed to give God or our fellow humans what is due to them. Sin, understood this way, is not a problem merely of the self, but of relationship to others.

The cure for sin is to repair relationships. The one who has done harm must repent, and the one harmed must forgive. Because Jesus is God made man, he can forgive every sin. He can offer divine forgiveness, and he wants to do it. He does so continually throughout his public life, even instructing his followers, as we said, to go on forgiving sin in his name after his death.

This forgiveness is key to his overall mission, which is to restore friendship between God and humanity: “For God did not send his Son into the world to condemn the world, but that the world might be saved through him” (John 3:17).

At least 137,500 absentee ballots were cast through unlawful vote trafficking throughout several of Wisconsin’s largest cities in the 2020 election, according to research presented last week to the state Assembly’s Committee on Campaigns and Elections by the public interest organization True the Vote (TTV).

Ballot trafficking is an activity in which absentee ballots and votes are solicited, sometimes in exchange for money or other valuables. They are then collected through a process called “harvesting” and delivered to drop boxes by intermediaries (someone other than the voter), who are often paid a per-ballot fee by partisan actors.

“An organized crime against Americans” is how TTV cyber expert Gregg Phillips described to the committee what happened in Wisconsin and elsewhere during the 2020 election.

Based on his 15-month study of election practices in Georgia, Arizona, Wisconsin, Pennsylvania, Texas, and Michigan, Phillips estimates that at least 4.8 million votes were trafficked nationally.

According to the True the Vote report, 242 intermediaries in metro Atlanta made 5,668 stops at drop boxes during elections in late 2020. In its report, TTV said it obtained 4 million minutes of drop box video surveillance tape that helped to document its Georgia findings.

“Many of the traffickers we spoke with do not recognize what they are doing as being a problem,” TTV spokesperson Catherine Engelbrecht said.

The study found that in Arizona, 202 intermediaries made 4,282 separate visits to ballot boxes in Maricopa County.

Several Arizonans have since been indicted for election law violations, with at least one conviction, according to Phillips.

“From these pings, it can be determined where you work, where you sleep, and even what floor you are on within inches,” he said.

The Wisconsin study focused primarily on the Milwaukee County area, with some partial initial data coming from Racine and Green Bay, where the study will soon be further expanded, Phillips said.

In those three areas, TTV’s cell phone ping research found that in the two weeks from Oct. 20 through Nov. 3, 2020, 138 individuals each visited the location of a nongovernmental organization at least five times and made a combined total of 3,588 trips to absentee ballot drop boxes.

“That’s an average of 26 trips per person to drop boxes in the Milwaukee area,” Phillips said.

“Is this evidence of fraud?” committee member Lisa Subeck, a Democrat, asked.

“Vote trafficking is being done through the process. It is illegal,” replied Engelbrecht, who stated that every vote cast illegally cancels the vote of a legitimate voter.

Wisconsin Statute 6.87 (4)(b)1 provides that an absentee ballot envelope, in which the cast absentee ballot is placed, must be “mailed by the elector, or delivered in person, to the municipal clerk issuing the ballot or ballots.” The Circuit Court in Waukesha County in Teigen v. Wisconsin Elections Commission, has agreed, holding that use of drop boxes for absentee voting violates Wisconsin law.

Drop boxes, if unattended by a municipal clerk or in an unauthorized location, are illegal under Wisconsin law. The law is currently being challenged in the Wisconsin Supreme Court.

In her testimony, Engelbrecht stressed that the TTV report was focused on the process and wasn’t attempting to prove the 137,551 votes were illegal votes.

State Rep. Dave Murphy, a Republican member of the committee, stated: “If you vote in an illegal way, it is an illegal vote. If the process is illegal, the vote is illegal.”

Train attack: Terrorists are emerging in Nigeria like locusts – Adesina

TERRORIST had on Monday attacked the Abuja-Kaduna train carrying hundreds of passengers, reportedly killing nine and kidnapping several others.

Chinelo Megafu Nwando, a Physician, was a former staff of St. Gerard’s Hospital Kakuri.  A graduate of Dentistry from the University of Port Harcourt, Dr. Nwando won the award for Beauty and Brain in 2015.

She was born in Umuase Village, Onitsha, Anambra State, and worked as a medical dentist for Kaduna State Dental Centre and previously as a private dentist at the St. Gerrard Hospital at Kakuri, Kaduna State

Farida Suleiman Mohammed, 29, a law graduate from Usmanu Danfodio University, was from Kankara LGA, Kastina state.  Before her death, she was a legal associate at AMCON in Abuja after an internship with Yahaya Mahmood & Co.  She is the second of three children by her parents.

Her elder brother, Maarouf Mohammed, described her as the most generous person and religious.

“She never missed the Monday and Thursday Muslim voluntary fasts,” he told The ICIR in a private chat.

Farida has been buried in Kaduna, according to Islamic rites

Comrade Musa-Lawal Ozigi was the secretary-general of the Trade union Congress.  He served as the General Secretary of the Construction and Civil Engineering Senior Staff Association (CCESSA), an affiliate of TUC, for almost two decades before he joined Congress in 2012.

His colleague, Akin Akinsola, was the Kwara State Chairman of TUC.  He was a staff of Dangote Flour Mill under OLAM.  The deceased comrades were on the way to Kaduna for an official assignment slated for Tuesday, 29 March.

Abdu Isa Kofar Mata, 55, was the Deputy Director, Enterprise Institutions in the Department of Vocational, Technical and Skills Development at the National Board for Technical Education.  Buried on Tuesday according to Islamic rite, he was survived by his wife and four children.

Tibilere Mosugu,  a lawyer, was a Kaduna Nigeria Bar Association member. Other victims include staff of the Nigerian Railway Corporation. The ICIR is yet to confirm their identity.

Is open conflict between rich and poor what Our Lord had in mind when he laid out the difficult path to heaven for the wealthy?

Whether you’re a new convert, or you’ve been going to Mass for decades, or you’re not even Catholic, a good Mass vocabulary is indispensable.

Source: How Good Is Your Mass Vocabulary?